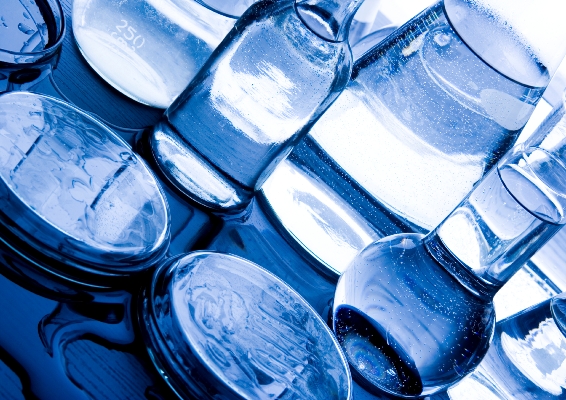 In this blog I aim to show that TOC of highly purified water (such as ultra-pure), can be determined by internal purification-process monitoring, to ensure that USP/EP standards are met, as well as by using an additional TOC analyser designed to nominally achieve Pharmacopoeia ‘System Suitability’ requirements. I believe that there is a case for modification of the pharmacopoeias to reflect this.

Online TOC analysers used for measuring the water quality of purified water production systems, typically take and analyse discrete water samples, and are designed to test accurately, at levels around and exceeding 500ppbC. Each individual test requires several minutes to complete, and values displayed on the screen are, at best, from water passing the analyser several minutes ago. In contrast, measurements given by process monitoring are instant, continuously updated, and the software is designed to give the most accurate TOC values at levels typically found within an ultra-pure water system (≤20ppbC).

Users of ultrapure water systems can be drawn to analysers designed to achieve USP 643 / EP2.2244, because they are required to meet the specification in other areas of their work, or just because they find comfort that a Pharmacopoeia specification is met. More often than not this is without looking in more detail to what the test is and at the significance of the values obtained.  Overall, increased labour and expenses are incurred, and a delay or lack of response to changes in water quality can result (as is highlighted in the ELGA technology notes 28 and 29).

Pharmacopeia methods specify a ‘System Suitability Test’ designed to confirm that the TOC readings of the monitor are independent of the source of the organic carbon. Results from a TOC analyser must satisfy the following equation:

In summary, analytical response for Sucrose at 500ppbC must be within 15% of that for Benzoquinone at 500ppbC.

While it is good to check consistency of TOC results with different organic chemicals, clearly, performance at levels of 500 ppbC are completely irrelevant if, in practice, the instrument is used to monitor levels below 20ppbC, and achieving specifications laid out above gives no indication of performance at such low levels and can actually be quite misleading. In addition to this, such TOC analysers are typically calibrated using standard solutions of 1000 ppbC.

Other analytical methods must be validated, with checks to characterise performance, at and around the levels they are required to determine, as this is the only true way to ensure accuracy and precision of the sample results. Great lengths are often gone to, to simulate the conditions and make-up of the ‘real’ sample when testing known standards so that unexpected effects and interferences can be accounted for.

Due to contamination and interference issues, for TOC analysis it is impractical to create known and traceable standard solutions at levels of, even close to, 5ppbC (a typical level found in a pure-water system); to attempt this would require a lot of additional expensive equipment to generate the sample on site and supply it directly to the analyser.

Given this information, it seems to me that TOC, while a valuable measure of water-purity is only ever going to be an indicating parameter when measured at low levels in real systems, and exact values should not be relied upon.

ELGA feel that the best approach is to monitor the organic purity of the water purification process in real-time using the difference in conductivity across the UV treatment step; We have found, at the relevant levels, such monitoring to be very reproducible and to give results in close agreement with that from the analysers built solely for TOC testing, but in a much more timely manner. We have also found that changing the nature of the organic compound measured (using those defined in the Pharmacopoeia methods) did not affect this agreement. 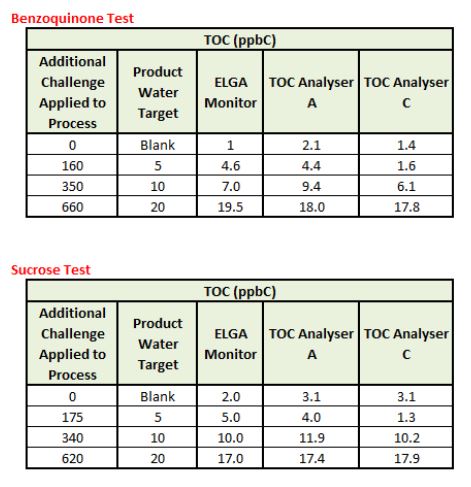 If values given by the ELGA TOC monitor during the highest levels tested (TOC 620 & 660ppbC) are normalised for an influent challenge of 500ppbC and the reading of the ‘blank’ removed, resulting values are 14 and 12ppbC for benzoquinone and sucrose, respectively. Therefore the response for sucrose is within 15% of that for benzoquinone and in agreement with tolerances set in the Pharmacopoeia System Suitability tests.

Clearly agreement between results from the lower level challenges is worse, and values are greater than 15%, but this is also the case for both dedicated TOC analysers.

Water purification process monitoring can give values for TOC at least as accurately as the specifically built TOC analysers at the levels relevant to an ultra-pure water system, and eliminates the time delay inherent to analysers designed to directly comply with the Pharmacopeia System Suitability methods.