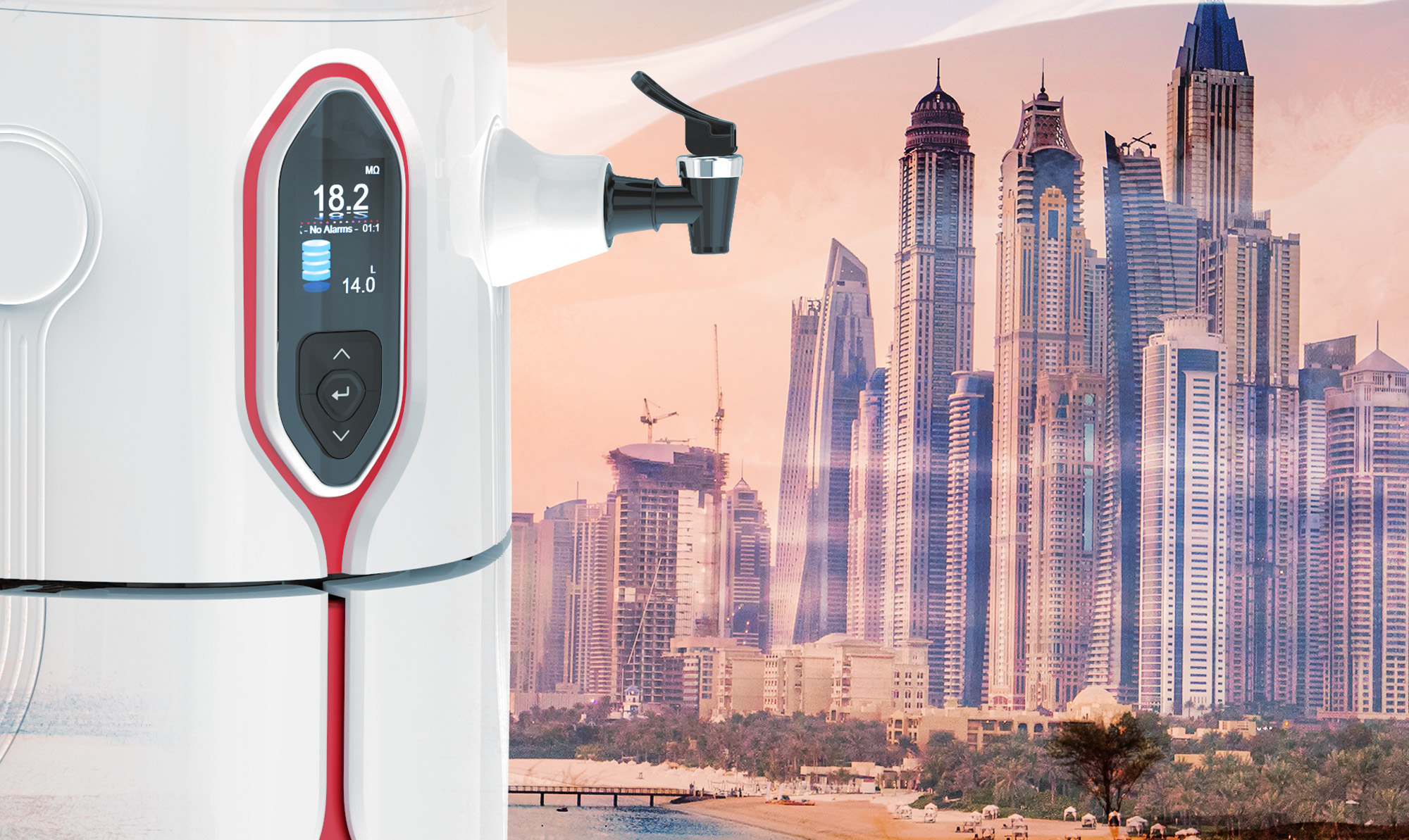 The number of countries suffering from shortages of fresh drinking water has risen significantly in recent years due to rapid population growth, climate change and the intensification of industries such as agriculture. Since seawater represents about 96.7 % of the total available water on the earth, desalination by seawater reverse osmosis (SWRO) is currently the most economical way to produce potable water. However, SWRO only demonstrates around 50% efficiency, due to technical limitations related to high osmotic pressures and the concentration polarisation phenomenon. This led a team of scientists from the United Arab Emirates (UAE) and Italy to evaluate a plasmonic photothermal membrane distillation tool that could drastically increase the efficacy of seawater desalination.

Membrane distillation (MD) has emerged as a potential alternative or complementary technique to SWRO in recent years. However, conventional MD systems are negatively affected by temperature polarisation, which drastically reduces their performance.

One option for increasing desalination capacity could be photothermal membrane distillation (PMD), a hybrid thermal membrane technology based on the use of microporous hydrophobic membranes. The plasmonic photothermal MD device comprises advanced nanostructured membranes with metallic nanoparticles (NPs) in polymeric matrixes. This novel method is unlimited by osmotic phenomena, and so it can produce desalted water with a high thermal efficiency of over 85 % and a comparatively low energy input. Researchers from the Masdar Institute of Science and Technology in the UAE, and the National Research Council of Italy (ITM-CNR) and the Italian universities of Calabria and Sassari, have studied the effects of NP content on the membrane surface temperature resulting from the polarisation phenomenon, to determine the influence of photothermal plasmonic excitation on MD function.1

Deionised water produced by a PURELAB® water purification system from ELGA LabWater was used throughout the investigation. Silver (Ag) NPs were synthesised by chemical reduction with sodium citrate as a metal precursor, and flat-sheet microporous membranes containing Ag NPs were prepared by the nonsolvent-induced phase inversion process. Scanning electron microscopy

and transmission electron microscopy were carried out to establish the influence of the Ag NPs on the surface and cross-sectional morphology of the membranes. To explore the photothermal effects on the membrane, a high-pressure UV mercury lamp was used to irradiate a dedicated dead-end vacuum MD cell while a feed solution was pumped over the membrane. The membrane surface temperature was monitored with a probe during the experiment. A comparative energy analysis between the vacuum MD prototype and a standard reverse osmosis set-up was also performed.

The photothermal heat flux was 1.7 times greater for tests with pure water than the latent heat flux associated with the water evaporation through the membrane, and was approximately doubled for a saline solution. The thermal radiation energy of the UV lamp raised the surface temperature by about 2.5 K in membranes without Ag NPs, compared to an increase of 4 K in those containing these metallic nanoparticles.

This study demonstrated that thermoplasmonic effects were promoted by photothermal excitations of Ag NPs incorporated into microporous membranes. This raised the feed temperature at the membrane surface exposed to UV irradiation, and so reversed temperature polarisation, achieving a previously unrecorded MD efficiency.

Despite the promising early results, the major challenge facing this new MD equipment, is the scale-up from a micrometre to an industrial scale. Energy consumption is a key factor to consider in scaling up, and the comparative energy analysis shows that this novel thermoplasmonic technique has the potential to reduce energy demands by 25%, significantly boosting the performance of the pre-existing MD system. The ability of PMD to effectively operate at high salt concentration, regardless of osmotic counter pressures, could play a vital role in enhancing water quality and desalting capacity, ultimately improving the sustainability and productivity of the seawater desalination process.

The presence of impurities in laboratory water can be a major problem in research experiments, and can seriously compromise results. ELGA LabWater has been a trusted supplier or pure and ultrapure water since 1937. We believe in giving you choice in how you use our water purification solutions, supported by excellent service and support. For more information on our Type I ultra pure water systems, check out our PURELAB Quest, PURELAB Chorus 1 Complete and our PURELAB flex models.